Thanks to a few signature FBS wins and solid out-of-conference play, the CAA boasts six nationally ranked teams out of their 13 members for the 2022 season, with two receiving votes in the latest Stats Perform Poll. The CAA at a minimum should see three teams make the playoffs, but they would like to match or better the 2018 season that saw six playoff teams. Here are the early season grades for those eight programs through Week 6:

Mike London has finally brought some excitement back to Zable Stadium and the City of Williamsburg. After amassing a 15-17 record over his first three seasons, the Tribe enter their Week 7 bye with a 5-1 record and an FBS victory on their resume. Stumbling once against a solid Elon team, William & Mary appears to have found a rhythm offensively behind QB Darius Wilson and RB Bronson Yoder. Including the win over Charlotte, the Tribe’s last game against #6 Delaware sent some shockwaves through the CAA. Kicker Ethan Chang booted two pivotal 40+ yard field goals, and Yoder rushed for 114 as they knocked off the Hens in Williamsburg. William & Mary has a significant strength of schedule for the remainder of the season, and they finish with Rhode Island, Villanova, and Richmond. One could argue for three CAA teams to grab a spot in the FCS Playoffs this season, but William & Mary will need to finish undefeated.

If this article was written two weeks ago, Delaware would receive an A+. The Blue Hens had two tests this season prior to facing off against William & Mary last weekend. They made a statement in their season opening victory in Annapolis, and handled a highly-ranked Rhode Island team early in the season. William & Mary however was able to force three turnovers and bring the Hens back to reality. Delaware faces another tough test against Elon on October 29th, as well as Richmond and Villanova before the season is over. If the Hens want to keep their playoff hopes within reach, they must continue to lean on QB Nolan Henderson and limit the turnovers. Delaware’s defense has been stout, only allowing 77 points through six games, the lowest mark in the CAA. Sitting at 5-1, time will tell whether we see playoff football back in Newark, but it will not be an easy road ahead.

QB Matthew McKay and the Phoenix are one of the preseason CAA sleepers making noise through Week 6. Starting off 5-1, Elon’s only loss was a 42-31 shootout at Vanderbilt where they outgained the Commodores 495-424. Two of their signature wins came against William & Mary and Richmond, both of which are CAA title contenders. The Phoenix defense has been able to bend but not break thus far, and they will certainly rely on that as they chase for the CAA’s automatic bid to the FCS Playoffs. Halfway through the season, Elon is my pick to do just that.

One of the harder teams to grade at this point given the diversity in their schedule through six weeks, and still ranked coming into Week 7 at 3-2, it appears that the media and coaches still hold the Wildcats in high regard. At this point in the season in FCS football, rankings do not necessarily matter. The only thing that matters is the conference opponents you have standing in your way of a playoff berth. This weekend’s tilt against Richmond at Robins Stadium will prove to be Villanova’s most important, and toughest FCS matchup yet. Expect this to be a high-scoring game, one which Villanova needs to pull out in order to keep their playoff dreams alive before facing William & Mary and Delaware to close out the regular season.

With the addition of new OC Billy Cosh by way of VMI, a new starting QB in Reece Udinski, and various other additions across both sides of the ball, Richmond has faced some growing pains this season. After last week’s tough loss against Elon, expect those to be over. Udinski leads the CAA in passing with 300.2 yards per game and an impressive 77% completion percentage through five games. With all of the new firepower on the offensive side of the ball in RVA, the defensive play was one of the uncertainties heading into the season. Besides giving up 30 points to a gritty Elon team, the Spiders defense has held its own. The Spiders’ road ahead is by no means an easy one, however, this is a team that can go on a tear in their last six games and can potentially take the CAA crown outright. Certainly one of the most interesting FCS teams to watch as we head into the second half of the season.

Picked to finish 3rd in the CAA Preseason Polls behind Villanova and Delaware, URI had high hopes heading into the 2022 season. Their two losses are to FBS Pittsburgh, and a three-score loss to Delaware in Week 3. The Rams offense is currently ranked 8th in the league in offensive efficiency, and 6th defensively. Rhode Island faces Elon, Monmouth, and William & Mary over the next three weeks, and will need their defense to rise up to the challenge in order for the Rams to stay playoff hopefuls. Based on their remaining schedule and the already high number of strong CAA teams contending with the rest of the field for a playoff spot, I see the season ending in South Kingstown for the Rams after their 11/19 contest against Albany.

First year HC Rick Santos is no stranger to UNH Football. As a three-time All-American with the Wildcats, Santos took over the program from his former UNH coach Sean McDonnell and has not disappointed. Originally picked to finish 9th in the league, UNH technically sits atop the CAA through Week 6 at 4-0 in conference play. While I do not foresee the Wildcats making the playoffs this season, football fans in Durham have to see that Coach Santos was the right choice to succeed McDonnell.

Similar to UNH, Monmouth was projected to end their season near the bottom of the pack in the CAA for 2022. That looked to be the case after falling to New Hampshire in the season opener, and a close loss to a high-powered Fordham offense in their second game. Since then, the Hawks are 4-0, out-scoring their opponents 167-86, and averaging over 41 points per game. Thanks to the CAA scoring leader, RB Owen Wright, Monmouth hopes to continue this hot streak, while considerably having the easiest CAA strength of schedule out of all of the teams listed above. Even if the Hawks drop their 11/5 matchup at Delaware, one could make a case for Monmouth to make an appearance in the FCS Playoffs. 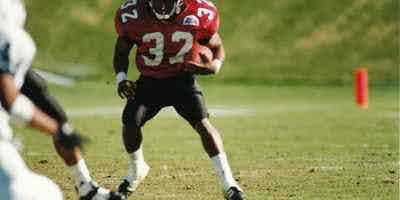 New Mexico State never locked up the Big West's spot in the Potato Bowl in the 90s. An appearance could provide a fun case of redemption.

Valparaiso's Game This Weekend a Homage to The Gridiron Classic

Valparaisos' game against NMSU brings memories of the conference's crowning achievement during the mid-to-late 2000s.