For most Southern Conference football fans, the first day of October was circled on our calendars for a long time. It was the first weekend of the season that featured almost a full slate of Southern Conference games, and one that could, for the first time this season, provide a real separation point at the top of the league.

One of them was one most of us had circled in the preseason, while the other game with national implications, came as a bit of a surprise. The game between Chattanooga and East Tennessee State is one that most Southern Conference fans had circled since last spring. It figured to be a matchup between two teams battling for a Southern Conference regular-season title. Let's take a look back at the 2022 version of the battle between the two and take a look at the 0-3 start to conference play for ETSU.

This season has been a disappointment for both ETSU fans and first-year head coach George Quarles. With the playoffs now a foregone conclusion, it's time to re-adjust expectations for Bucs football fans, while UTC clears a second SoCon hurdle heading into its off week. So far, the 2022 season has seemed more like a train wreck than a victory train for the Bucs, with UTC adding more salt to the wounds by keeping the rail after an eight-point win at rainy; cool William B. Greene Stadium this past Saturday.

Jumping ship or bracing for the storm?

The land-locked Pirates are coming off a school-record 11 game winning season and a trip to the FCS Playoffs where they lost in the quarterfinals to eventual national champion North Dakota State. With the return of 14 starters and coming off a conference win, East Tennessee State has not had the start many thought they would.

It’s not all too unlike the Bucs’ start to the 2019 campaign, which was once again coming off a Southern Conference crown. The Bucs started that particular campaign by losing their first seven SoCon games, with all of those losses except one coming by a touchdown or less.

The Bucs, notably, lost plenty from that team that had produced that miracle run to the Southern Conference crown the season before, winning many of the tight games that they would seemingly lose a year later.

The Bucs were led by then head coach Randy Sanders. It took him a little time to get them back to a championship-level contender, and it took some time to get some consistency at quarterback. He then found Tyler Riddell. Riddell was able to use the COVID 2020 season, which was played in the spring of 2021 to gain experience and learn how to lead a Bucs offense to victory.

Now, there are a couple of reasons I think the Bucs are struggling on the offensive side of the ball. They have ­­­­nothing to do with George Quarles, and everything to do with having two 1,000-yard rushers and viable receiving threats in the backfield. With the departure of Quay Holmes, who left as the program’s all-time leading rusher and one of its best players in school history, it left more of a void for ETSU than it would most.

Defenses had to prepare for both, and that’s not even to mention they still had to worry about the the Bucs’ standout wide receivers, in Will Huzzie and Malik Murray. With Holmes gone, the defensive focus is clearer for the opposition, and no matter how good the offensive line is or isn’t, or how much of a threat Einaj Carter and Will Huzzie are as big play threats, it can’t replace what Holmes made other defensive coordinators in the SoCon have to prepare for when defending the Bucs.

However, ETSU's offensive scheme is not the same as it was last year. This is where I think fans have somewhat a valid argument. When George Quarles was the offensive coordinator at Furman, his unique style of offense takes the personnel to execute it to precision.

When Furman had Darren Grainger—a true athletic dual threat—the Paladins were nearly unstoppable at times during the 2019 season. But when Furman wasn’t prepared for Grainger’s sudden transfer to Georgia State following the 2019 campaign, since the Furman staff didn’t bring in a starter for the 2020-21 COVID season because Jace Wilson was unable to start school early, the Paladins were left with a lesser athletic quarterback to fill the void, in Hamp Sisson.

Furman’s offense was nowhere near the same as it had been with Grainger running the very same offense, which posted three 600-yard outings and three games in which the Paladins scored 50 or more.

So the issue for ETSU is all scheme oriented and whether or not the personnel fits that scheme. It starts under center, and with Tyler Riddell. While the Tampa, FL., product is athletic, he’s not Darren Grainger. He isn’t a true dual-threat and excels in more of a traditional pro-style offense.

The scheme should be fit to the personnel that was inherited and not the other way around. It is interesting to note that in 2018, Furman was more of a traditional pro-style, with option mixed in, as Harris Roberts helped lead the Paladins to a share of the SoCon title as a senior. The scheme was fit to his expertise as an accurate passer.

Saylors and Riddell are tremendous players in their own right, but it’s my own observation that they are being asked to do things that maybe they aren’t as accustomed to. With that said, the fans that are calling for Quarles to be fired are unreasonable. Can you imagine if VMI had said this of Scott Wachenheim when he was implementing his system at VMI. In an offense that more catered to Riddell's skillset last season, he thrived, tossing 19 scoring strikes and only five INTs.

­­Quarles entered with some fans unhappy about him being hired. I get that. He wasn't an "ETSU guy" but because you don’t agree with former Director of Athletics Scott Carter’s hire, doesn’t mean you automatically question the hire because things are going well in season one.

It baffles me that the expectations are such that ETSU thinks that there is reason to fire Quarles. Wofford has reason to sound the alarm about its coach. Josh Conklin has literally lost 15-straight off a SoCon title in 2019 and still has a job! When that happens, then it's time to start asking questions.

So rather than jump ship. Brace yourself and settle in for a rough ride in season one. If the storm continues through season two, then I’ll lend an ear. But for now, you must place your faith in Quarles and exercise some patience.

He deserves at least that. Hell, even Josh Conklin deserved that at some point. But he’s way beyond that now I think. It’s interesting to me that he hasn’t been fired yet. Now, yesterday’s game obviously was disappointing for Bucs fans for many reasons. I get it. Chattanooga is a major rival. I get that too. Losses are painful to the Mocs in any sport, but I understand the importance of the game and what it means to beat that program in football.

It's an upper echelon rivalry in the SoCon and FCS football. The Bucs held a 13-0 halftime lead. The loss saw ETSU drop to 2-3 overall and 0-3 in Southern Conference play. With the win, Chattanooga improved to 4-1 overall and 2-0 in league play. As the preseason SoCon favorite, Chattanooga outscored ETSU 24-3 in the second half to come from behind and take another step towards the Mocs ultimate goal. The Mocs completed their fourth-largest comeback in school history with a 24-16 win at a rainy William B. Greene Stadium.

In taking a 13-0 lead to the break, it looked like the Bucs might be getting ready to celebrate a season-altering type win, out-gaining the Mocs 190-68 in the opening half of play. Two Bucs field goals were the result of UTC special teams miscues, which gave the Bucs the ball in the red zone twice, however the Mocs defense was able to rise to the occasion and hold the Bucs out of the end zone on both occasions, including in the fourth quarter to preserve a one-point lead.

At halftime, Chattanooga head coach Rusty Wright and staff made the necessary adjustments, and the UTC offense would come alive, posting 271 yards of total offense, while limiting the Bucs to just 44. The Mocs ended the game with a 339-234 advantage in total offense. The Mocs also held decisive advantages in first downs (23-11) and passing yards (221-90).

The battle of the league’s two best running backs saw UTC’s Ailym Ford hold the slight edge in rushing yards, finishing the contest with 101 rush yards and two TDs on 28 attempts. ETSU’s Jacob Saylors, who was the SoCon’s preseason Offensive Player of the Year, who currently leads the Southern Conference with 560 yards and six rushing scores, finished the day with 93 yards on the ground. The loss almost certainly assures ETSU won’t be returning to the FCS playoffs this fall, as few would have guessed the Bucs would find themselves now just playing for pride with three weeks remaining in the month of October.

Perhaps the most telling stat at the end of the game was third down conversions. The Mocs finished the afternoon converting 9-of-16 in the penultimate down, while ETSU was just 1-of-14. Through the first five games of the 2022 season, the Bucs have converted at just a 27% clip on third down. That currently ranks them 110th overall in the FCS in third down conversion percentage this season.

The Bucs got a 36-yard scoring run from Brandon Irby, which was followed up by field goals of 32 and 33 yards by Tyler Keltner to enter the half with a 13-3 lead. Irby’s 36-yard run was the longest rush of his career.

The Mocs' first points of the game didn’t even come until a little over three minutes remaining in the third quarter, as Andrew Southard connected on a 37-yard field goal to finish off a 13-play, 54-yard drive. In the fourth quarter, the Mocs offense would come to life, as they exploded for 21 points. Ailym Ford got the Mocs within three with a 9-yard scoring scamper with 14:22 remaining.

ETSU was forced to punt back to the Mocs midway through the fourth quarter, however, Trace Kelley’s punt hit off the back of Mocs return man Chris Houston, and ETSU pounced on the loose ball inside UTC territory. However, the Bucs had to settle for a third Keltner field goal, matching his career-high total at Vanderbilt, as he knocked through the 31-yard field goal to make it a 17-16 game.

The Mocs would grind the will of the Bucs in the process on the next drive. UTC covered 75 yards in 12 plays, however, more importantly took almost six minutes off the game clock, as Ford capped the drive with a 1-yard scoring plunge over the top to increase the Mocs lead to eight points with just 1:10 left.

ETSU returns to action next Saturday with a trip to Lexington, VA., to face VMI, as both teams will be in search of their first league win. Kickoff is set for 1:30 p.m. at Foster Stadium. Chattanooga will be off next Saturday before returning to Finley Stadium to face VMI on Oct. 15.

Stay tuned tomorrow as I recap the rest of the weekend's action and take a look at the updated SoCon power rankings.

New Mexico State never locked up the Big West's spot in the Potato Bowl in the 90s. An appearance could provide a fun case of redemption. 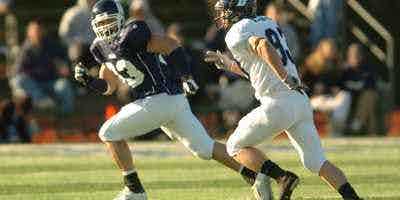 Valparaiso's Game This Weekend a Homage to The Gridiron Classic

Valparaisos' game against NMSU brings memories of the conference's crowning achievement during the mid-to-late 2000s.